I’ve often been asked what a typical day looks like for me as a quadriplegic (quad). While every quad is different I can confidently generalize that with being paralyzed and fully dependent one has to spend a minimum of several hours a day dealing with general spinal cord injury care. I can only speak to my personal experience, but over the last 7 years I’ve had to widely adjust my expectations about how much I can get accomplished in a day.

Regardless if you suffer from a spinal cord injury or not, one has to manage their expectations on a daily basis. If you are a mother of four small children or a high-powered attorney who has a full docket of cases to review with a family at home, how you manage your time is essential.

I am the type of person who likes to be extremely productive and utilize every moment of every day in order to learn something new, enjoy life, trying to things, and get things done. I have a full-time job, which requires immense attention on a regular basis. This does prevent me from getting out and about as I would like during the weekdays. However, this is my choice and professional productivity is very important to me. The challenge with being paralyzed is that you have to devote so many hours a day to general survival for your healthcare.

I was calculating out the amount of hours I spend on essential spinal cord injury care each day, how much exercise I engage in, how many hours I need to work, and most importantly, how this all fits in with my constant chronic nerve pain that feels like pins and needles piercing my body every moment of every day. Needless-to-say this can be challenging.

It turns out that I need about 4 hours at minimum to complete my bowel and bladder care, shower, getting in and out of bed, and general caregiving activities each day. I then exercise for about 1.5 hours a day. These are the essentials I need just to survive on a daily basis. The particular challenge with respect to my situation is with the chronic nerve pain that plagues me on a daily basis because my productivity goes way down mid-afternoon. This means I need to get in bed early, relax, meditate, and try to re-direct my pain in order to sleep well to be productive the next day.

I generally get most of my busy work done in the morning, work quietly until mid-afternoon, and then get in bed early.  Over the years I’ve pushed myself to the brink of exhaustion, pain breakouts, and complete misery with trying to get too much done in a day. I’m not including the periods in life where anxiety or depression can take over, which can further drastically reduce one’s productivity in a day due to emotional up’s and down’s.

What a typical able-bodied person gets done in a workday of approximately 8-10 hours I have to get complete in no more than 4 to 5 hours. END_OF_DOCUMENT_TOKEN_TO_BE_REPLACED

The topic of caregiving is a very tricky one to navigate. This is an extremely sensitive topic for me and can be challenging for me to even write about.

I preface this blog by stating it is written from my personal and dozens of other spinal cord injury folk’s perspectives with respect to our experiences. As a quadriplegic, paralyzed from the chest down, I am fully dependent on another human being for my daily care from bathing, bowel program, catheter changing, dressing, cooking, etc. It can be tremendously challenging to have to rely on another human being to take care of you on a daily basis. But unbelievably heartening to know that there are people out there who dedicate their lives to wanting to help others.

The read the rest on Push living magazine at: http://pushliving.com/caregiving-quadriplegic-living-fear-trust/ 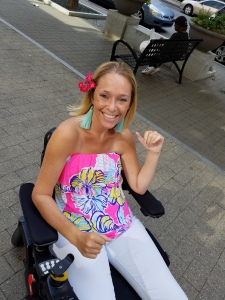 Recently Aaron, my boyfriend, wrote an awesome article on Push Living Magazine talking about what it is like to date a woman in a wheelchair. It’s a pretty cool article, which you can read on: http://pushliving.com/dating-disabled-woman/

…  The real question at the time was, did the chair bother me? Clearly, I am in love with the women, so, no it did not deter me from dating her. I suppose most guys have a million questions running through their head when starting to date a woman in a wheelchair, but when I met her, I didn’t see the wheelchair …I saw her…

Six months after breaking my neck in 2010 a gentleman sent me a Facebook message telling me that he thought I was very cute and he wanted to suck my toes. He informed me he was a Devotee. Of course I had no idea what this meant at the time, so I asked around to some of my other friends who had been injured longer than I had. They told me that a Devotee is a person who is attracted to folks in wheelchairs. I was then advised to stay away from them at all costs because they were very creepy and that it was unnatural for people to be attracted to just the wheelchair.

This got me thinking. There are so many people out there in the world with all kinds of fetishes from being tied up, whipped, electrocuted, swingers, etc. I was curious as to why someone who is attracted to people in wheelchairs is any different?

Can we really help who we are attracted to?

Some guys like big breasts, overweight women, blonde hair, blue eyes, etc. Just because you don’t frequently hear about people attracted to other people in wheelchairs does not make it, in my opinion, creepy right off the bat. Of course there is always a small segment of the population in any group who give the rest of the group a bad name.

Think about it … That macho guy who slaps women on the ass, calls them “sweetie,” and may tell them that he likes their big breasts. This type of guy gives other guys who like women with big breasts a bad name. There are plenty of men who like women with big breasts, but they don’t necessarily advertise this publicly at first. They may go up to a woman, start a conversation, get to know them, and later on in the relationship it may come out that they were initially attracted to that specific woman because of their breasts.

I think one of the challenges with folks who are Devotees is that it is such an unspoken attraction that no one talks about. First of all, from a number’s perspective, there just simply aren’t as many people in wheelchairs in the world as there are women with big breasts. Secondly, there are many Devotees out there who don’t put their picture on Facebook and then write you a creepy message. Clearly, this is not the best way to initially garner positive attention from a person in a wheelchair. Devotees should probably strike up a conversation and get to know them before announcing they are attracted to women in wheelchairs.  This has personally happened to me countless times.

Several years ago when I was living in China I was approached by a “Devotee.” He messaged me on Facebook to tell me that he thought I was attractive and that he was a Devotee. I decided to take that particular opportunity and dive into really understanding what it was about women in wheelchairs this guy was attracted to.

He was from Switzerland, physics was his passion, good looking, and he had a very well-to-do job in the gaming world. We struck up a series of conversations, which I’ve saved over the years, and I learned that he was specifically attracted to quadriplegic women in power wheelchairs. He seemed to like paralyzed feet quite a lot, massaging them, and the idea of helping women cut, and eat their food. At first I thought this was a little odd, but I tried to remain open-minded as I probed further. Fortunately, he was very polite and only asked progressive questions when I permitted them. He told me that he saw a woman in a wheelchair in a magazine when he was a teenager and there was an unbelievably strong attraction right off the bat. From then on he was fascinated and drawn to women in wheelchairs.

Once we got past all of his questions about what I had to deal with on a daily basis in a wheelchair I finally got to know him as a person. I think he was just so curious because he said no other women in wheelchairs would give him the time of day. I asked him, as I have asked dozens of Devotees over the years, if he leads with telling women he is a Devotee? He said yes as many others did as well. I did tell him this probably was not the best way to get the attention of any woman. I planted the idea in his head that if he was attracted to a woman with big breasts would he Facebook message them to tell them he thought they were attractive because of their big breasts? He said he certainly would not do that … Well, I told him it was the same concept with a person in a wheelchair.

While there are always exceptions to the rule, many women want to find a guy who sees them and not just the wheelchair. Of course with guys who are not Devotees many of them only see the wheelchair, decide it is too much for them to handle, and do not get to know the person or even give them a chance. END_OF_DOCUMENT_TOKEN_TO_BE_REPLACED