After I returned home from my surgeons office where he informed me my first surgery had failed to heal correctly leaving me with a stage 4 pressure sore down to my tailbone (approximately 4 cm deep, 4 cm wide, 4 cm long) I crawled back in bed. It took me several days to process what had just happened. You must understand three weeks prior I had believed the surgery would solve all my problems, and I would be starting to get on with my life at this point. Rather, I was now permanently stuck in bed with a giant hole in my ass.

I started researching and the next logical progression was to get approval from insurance for something called a Wound Vacuum. A wound vacuum is a very interesting device, which later I would come to understand does not have much success on people who are paralyzed with very deep wounds. A wound vacuum is essentially a vacuum you put over a wound and it creates a negative pressure seal on the wound by stuffing the wound with a specialized gauze, tape and attaching a machine with a tube to create a strong suction.

The pressure seal promotes granulation (Stimulates the production of collagen in order to facilitate tissue healing) as well as sucking the wound tightly together to promote healing. It is a funny looking device because when you have it on you have a big piece of tape and foam stuck into the pressure sore cavity with a plastic tube coming out of it attached to a big box at the end. I can think of no better way to describe it then it looks like you have a tail.

I had so many tubes coming out of me from my catheter tube in my bladder to a tail on my behind. It looked quite funny, but it did provide very good protection in case I wanted to sit up for a few hours. The months rolled on and the wound started to close from the top down. This is very bad. The inside cavity was not getting smaller, but the whole on top was. This is definitely what you do not want to happen. Three months later I was getting nowhere and at my wits end.

I went back to my plastic surgeon and the next course of action for someone in my situation at the time was to perform something called Flap Surgery. Essentially they cut out the bad tissue from the pressure sore, take a chunk of your buttock (either from the left or right or both) that has healthy tissue + blood flow. The surgeon then literally moves it over to where the old pressure sore used to be.

The surgery has a very high rate of success from a surgical standpoint, but a very high rate of failure from an aftercare standpoint with respect to making sure it does not get contaminated from poop, bacteria, poor hygiene, etc. I decided to bite the bullet and go for it. The caveat with the surgery is that you have to be lie on a highly specialized air fluidized bed, which is an absolute nightmare to get from insurance. After the surgery you’re not supposed to move from this bed for 8 to 12 weeks. I’m talking not at all … Stay in bed and don’t move.

I meticulously planned for this next surgical adventure. I underwent the surgery, but ended up spending the next three weeks in the ICU instead of going home. When you are paralyzed you experience pain much differently. I did not take any painkillers because they did not do anything for me since I cannot feel the actual site of injury. However, my body sure did. As a result, my blood pressure when shooting up and down for weeks on end causing me to pass out left and right. I absolutely terrified the entire ICU staff because they did not know what to do with me. 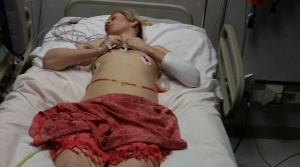 “Somehow a passing out episode caught on camera”

I assured them it was my body’s way of reacting to pain and in about 10 to 14 days the episodes would most likely subside. Of course they did not believe me, but when they stopped, they did not say a word 🙂

“My incredible sister washing my hair in the ICU”

I have many wild stories about my time in bed, ICU funnies, and my general experience, but I will save them for specific blog entries.

Bottom Line … I survived, I have a beautiful new ass, and I’m finally starting to live my life (minus 1 tailbone :-))

“Happy as a Lark … coming home from the hospital”

“Family visit to my Jail cell last summer in 2016” 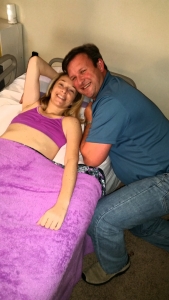 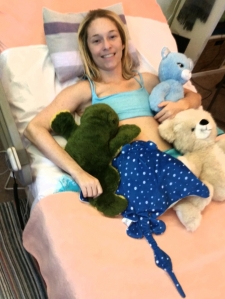